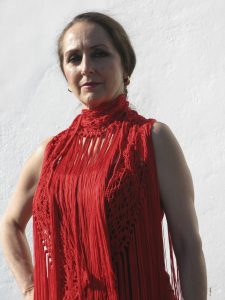 Dancer, teacher and choreographer, Veronica Maguire, is the artistic director and co-founder of Alma de España Flamenco Dance Company and School, established in 1991 in Victoria B.C.

In a performance and teaching career spanning over 45 years she has taught and inspired many students, some of which have gone on to cultivate professional careers of their own.

Veronica continues to stay connected with her adopted hometown of Jerez de la Frontera in Spain, a touchstone for continued growth and inspiration. As a result she has produced and directed world-class productions in Victoria such as Recuerdos in 2011, and more recently, Pasajes, in 2014.

Veronica has had the honour of performing in the Vancouver International Flamenco Festival, Dawson City Music Festival, Victoria Flamenco Festival as well as many other major performances throughout Western Canada including the Dancers for Life Gala as guest artist in a show that featured Karen Kain, Evelyn Hart, and Rex Harrington and also as a featured guest artist with the Victoria Symphony under the baton of Kees Bakels.

In 2013, Veronica received a Canada Council grant for Professionals and was chosen by peer assessment to win the prestigious Jacqueline Lemieux Award for her contribution to Dance in Canada.

Amity Skala has been active in the Victoria dance community since 1984. She has studied Ballet, Tap, and Modern dance as well as a wide range of ethnic dance forms. In 1996, she began teaching privately and became a faculty member at Kidco Dance School in 1998. She worked with the Veselka Ukranian Dance Association as a performer and teacher, including serving as interim Artistic Director in 2002-2003 and is currently the Promotions Manager for Ballet Victoria.

She has upgraded her teaching skills through workshops with The Royal Winnipeg Ballet, The National Coaching Institute and Movement Analyst Bill Evans. Her choreography has won awards at numerous festivals including Danceworks, The Greater Victoria Performing Arts Festival, British Columbia Ukranian Cultural Festival, and Pysanky Festival in Alberta.

Her passion for Flamenco began in 1994 when she started taking lessons that led to her current status as a company member with Victoria-based Alma de España, under the artistic direction of Veronica Maguire and the late Harry Owen.

In addition to performing with the company, Amity teaches in the affiliated dance school. Having traveled to Spain more than once, most recently spending time in Jerez de la Frontera 2012, Amity has had the opportunity to study with top Flamenco artists Eva Yerbabuena, Belén Maya, Rafaela Carrasco, Ana Maria Lopez, Angelita Gómez, Domingo Ortega, and José Granero. Amity’s skills and enthusiasm have earned many guest appearances as a teacher locally and internationally, including a 2003 workshop series in the US and guest teaching around the B.C. in 2014-15.  She continues to teach ongoing classes on Vancouver Island including in Nanaimo B.C.

In addition to many local stage shows and festivals, Amity has had the opportunity to perform professionally with Alma de España throughout the Pacific Northwest including Seattle Folk Life 1997, Nanaimo’s Port Theatre in 2002 and concerts in Calgary and the Queen Charlotte Islands in 2008.  She was a soloist in both Recuerdos 2011 and Pasajes 2014 with Alma de España. Other performance credits include guest appearances with the Victoria Gilbert and Sullivan Society, Symphony Splash 2006 with the Victoria Symphony, Butchart Gardens “Spanish Passion” Summer shows 2006 and as a soloist with Peña Flamenca.  Amity recently performed with Peña Flamenca at the Vancouver International Flamenco Festival in 2015.  She served the Flamenco de la Isla Society by acting as the Assistant Coordinator for the Victoria Flamenco Festival 2014-2019 and was a Board member for many years. She is currently an artistic advisor to the Society.  She is an inspiration to many, both personally and artistically, bringing a rare dedication to everything she does. 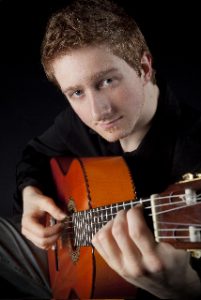 Gareth Owen blends traditional Flamenco guitar with his own original style. A talented young guitarist, from Canada’s West Coast, he is one of the privileged few North Americans born into the world of Flamenco. As the son of Flamenco guitarist, the late Harry Owen and dancer Veronica Maguire, Gareth plays with the instinct and raw intensity that comes from truly having the music in his blood. From an early age he has been immersed in the rhythms of Flamenco, performing professionally alongside his family and the Alma de España Flamenco Dance Company. In 2001, at the age of 12, Gareth participated in the CD recording of Alma de España’s “Flamenco Live” at Victoria’s McPherson Playhouse Theatre. In 2008, Gareth recorded his first solo album, “Gareth Owen Flamenco Guitar” live at the Alix Goolden Performance Hall in Victoria, B.C. Gareth’s most recent CD recording, “El Cobre”, with Flamenco singer Antonio de Jerez, has just been released (2010).

Gareth’s talent, technical ability and the way he draws the music from his very soul has earned acclaim at the Greater Victoria Performing Arts Festival, the Victoria Conservatory Festival of Music Summer Guitar Academy and his first sold out solo concert in 2006. Gareth has performed throughout British Columbia, including touring of the Gulf Islands and Vancouver Island. He has participated in concerts presented by the Arts Council in the Queen Charlotte Islands, the University Theatre in Calgary and the 2008 Toronto International Flamenco Festival. With Alma de España he has performed at the 2009 Vancouver International Flamenco Festival and the 2009 Dawson City Music Festival.

Gareth continues to return to Jerez de la Frontera, the heartland of Flamenco, to absorb the Spanish culture and traditions, and play for many of the local singers and dancers at Peña Los Cernicalos.   More recently he spent 6 months in Jerez where he performed occasionally in Tablao ‘El Lagar’ while furthering his studies with guitarists Jesus Alvarez, Pasqual de Lorca, Pepe del Morao, Manuel Jero, and the legendary Niño Jero. Today, Gareth draws on the inspiration of many of today’s great Flamenco guitarists.

Gareth creates a style that is all his own and maintains the essential spirit and traditions of pure Flamenco. 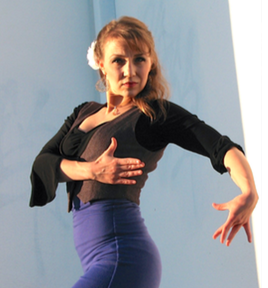 Alma de España is proud to have Denise join the faculty as choreographer and co/teacher for palmas.